Summary:
The episode starts with a live of MARs. It’s been three years since Aira became Prism Queen. The following years, Rizumu and Mion also won the tournament and became Prism Queens. Pretty Top agency is doing great, the audience for the live is packed, they have tons of new recruits at the Pretty Top School and the Prism Stone shop is also doing great.  The director of Pretty Top Asechi Kyouko san is pleased.
Mion, Aira and Rizumu finish their performance, watched by the new recruits and the other Pretty Top members. At that moment, a new girl called Ageha Miya runs on the stage and scream “I will beat Harune Aira!!”. As Pretty Rhythm always has been a realistic show, Miya gets thrown out by the security right after the OP ends. 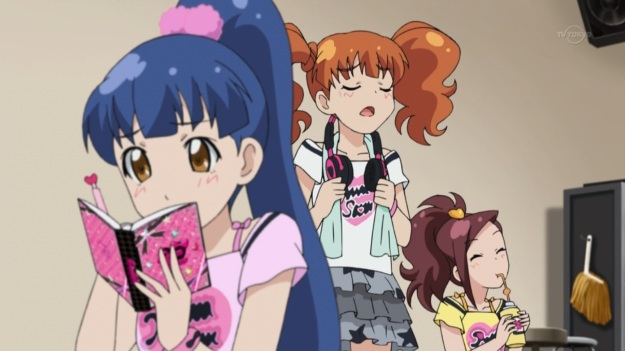 We then get a quick introduction of the other new characters:
Reina, the twintails girl seems to admire Aira and her teammates a lot and wasn’t pretty happy at Miya’s insolent behavior. Karin is the sidetails one, she tells Reina to just chill, she’s very carefree about it. She also has an habit of repeating the end of her sentences twice.  Ayami is the blue ponytail one, she’s the typical shy girl, and writes everything in her memo.

At Pretty Top’s office, Kyouko is scolding Miya, telling her it’s impossible for her to surpass Aira. Miya asks Kyouko if she’s from the future. As she isn’t, she can’t tell for sure whether she can beat Aira or not. At that moment, Jun sees in her eyes the Baby Twinkle Star, and tells her to enroll into Pretty Top, that way she’ll be able to compete against Aira. Jun tells her she first needs approval from Penguin sensei. She goes to the training room and find Reina, Karin and Ayami. They tell her Penguin sensei isn’t here right now, so she decides to drag along the three of them and go look for him. They find MARs during their after lesson coached by Penguin sensei.

Miya barges in, takes Penguin sensei and forces approval out of him. She then go and try to challenge Aira but is restrained by the other three new girls. Miya asks them that if they want to be at the summit of Prism Stars, they should come with her, as the summit is right there!!  The three girls answers that it’s not a matter of distance…
Mion and Rizumu like Miya’s behavior, telling her she’s pretty confident. Miya answers that it’s not confidence, but kido ai ruck : Kiai (spirit), Dokyo (guts) Ai (love) and a little bit of luck. KIDO AI RUCK. With these four things always in her heart, Miya is invincible!! Or so she says. Mion is even more interested in Miya and ask her why not try to take on MARs as a whole instead of limiting herself to Aira. Miya immediately agree and tell the other three to do their best.

They all disagree, asking when, why and where did they decide to team up with her. Mion taunts them and tell them to come at them already. They start cowering in fear, saying there’s no way they can beat MARs. Miya proceeds to ask all three of them if they’re from the future. As they’re not they can’t know for sure  whether they can beat MARs or not, no ones knows what the future is made of, so one should always try before giving up, or saying it’s impossible. Reina asks her what one should do when they try and fail. Miya answers one should continue trying anyway. MOU IKKAI CHALLENJI!!  Reina, Karin and Ayami are moved by her positive thinking and start to warm up to her. Miya is called over by Kyouko and is asked whether she wants to beat Aira and become number one. She says yes again. 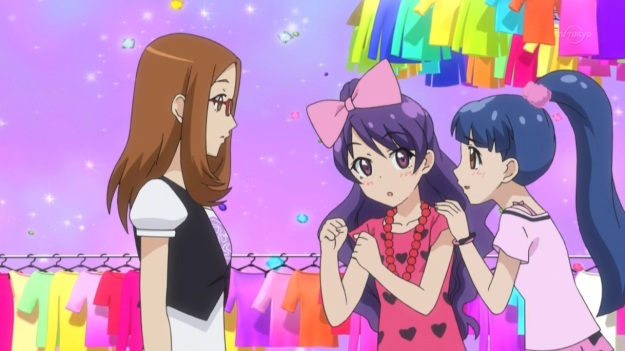 They go into the Prism Stone world and meet Akai Megane san. Miya asks her to give her clothes fit to beat Aira. Ayami tells her it doesn’t work like that and tell her to hand over the stones she gave her earlier. Miya gets dressed up like the other trainees.
Miya is stretching, Karin asks her if she ever did a live or something, Miya says today is the first time she’ll do a prism show.
Karin tells her that she and the other two won’t compete alongside her, as they still think it’s impossible to beat MARs. Miya is shocked at first but isn’t angry and tell them she’ll do it alone. Before going, she asks each one of them what is the thing they like the most. Reina says it’s singing, Karin thinks it’s dancing and Ayami is good at fashion. Miya is pumped and tells them she’s the best at these three things, so they should compete later, to see which is number one. Reina asks her why did she belive them so easily, she could be lying about singing well… Karin is wondering too, as it’s not like she saw them do anything… Miya says she trust them because there’s isn’t a person who would lie about thet thing they like the most.

Kyouko and Jun are talking about Miya, saying that she’s a newbie at Prism Shows but if she does have some hidden talent Kyouko will be able to make money out of her. Kyouko then wonders about Karin, Ayami and Reina, saying she can’t sense any star aura from them and asks Jun as the one who auditioned them why the hell did he chose them. He says that they’re prism waitresses, and then some poem: a maiden’s brilliance is the same as time or something like that (His poems have always been the only thing I have trouble understanding)
Miya starts to dance. Ayami says that even though her dancing skill is all over the place, there’s a little something that makes you unable to take your eyes off her. Miya then receive the feelings of the girls watching and try a prism jump, but end up jumping in the wall.

In the same order as that pic, Miya, Reina, Ayami and Karin apologizes to MARs, saying they took their precious training time, Aira tells them to not worry about it, and Miya takes her words by heart and think she really didn’t do anything wrong. She goes ask Penguin sensei if her perfomrance was good. He gets mad at her for calling him penchan, his wig jumps and reveals the 4 new familiars of the show called Pair Chamu. Rabbichi explains that they’re things Penguin sensei made that acknowledge people with a high possibility of beecoming Prism Stars.  Each girl gets one. Jun says it’s proof of Miya being worthy enough and congratulate her for entering the school, he gives her a mallet, she dumbly asks what it is.  The other three exaplins it’s a Prism Stone Trunk, where you put your clothes stones. Aira comes to speak to them telling them they get along. Miya agrees and Reina doesn’t: they just met today after all. Penguin sensei also gives them a Smart Pod Touch, some sort of phone. That way they can take note of their training schedules and other things. Miya uses it to call her best friend Hain, telling her she got accepted at Pretty Top and will contact her later when she makes her debut. 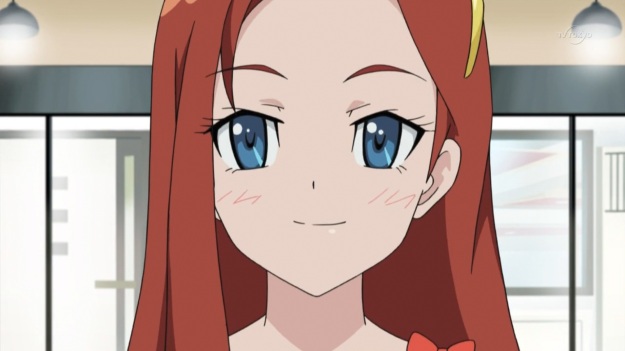 Hain is impressed and goes back to training. Penguin and the others tells Miya that she won’t debut anytime soon, as she just entered the school. Miya is disappointed at first but doesn’t care, saying it’ll be in the near future anyway. She’s a Mirai Musume indeed.

There’s much more use of chibiness now, but at the same time the animation is still at the best they did since the last eps of Aurora Dream. I was worried they would only show Aira and co in the first episode then it would be all about the new girls but it seems like Aira and co will still have important roles.  Jun  & Kyouko are still the directors and manager so that’s also awesome. Kyouko still isn’t married LOL. And next episode it seems like they’ll introduce a new designer who’ll become Shou’s rival both at work and love, so Sho X Aira will still get some spotlight too. I love the new main character Miya, and her Mirai Musume ideology. We really have the same way of thinking. Overall I was worried that the new season wouldn’t be in par with the great moments of Aurora Dream but this episode was a great start. The show’s catch phrase at the end of previews is “I am number one in the future!!”

Notes: Woah, that post took me some time, I wanted to do a detailed enough summary as the show isn’t subbed in english but then I think I might as well sub the show myself. I don’t know what to do, I don’t want to sub it as I feel like it’ll be a waste of time, but then again I’ll already be wasting plenty of time doing these summaries, if I manage to keep up. I’ll try my best.