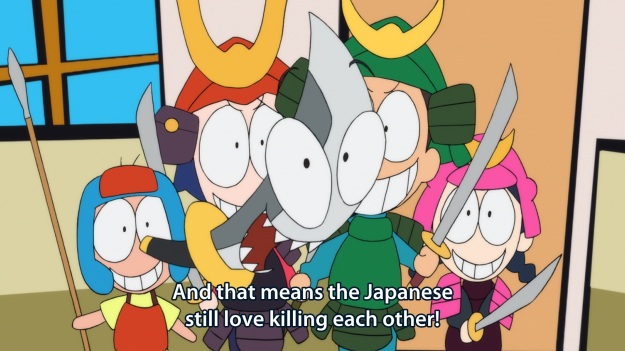 I picked this up randomly because I really like the character design and I’m really enjoying it. Somehow I have really good luck with picking up shows.

You shouldn’t judge books by their covers. It’s not another sexual fanservice show with Sengoku Era generals portrayed as women. Besides some of the character’s designs themselves,  it barely has fanservice scenes. From what I’ve seen at least.  I’m currently on episode 6, and every episode so far has been great. Each episode introduces a new character along with a really good story, often using urban culture even I know of. I think this episodic format will continue until episode 11 or so when things will get serious. And it’s a 26 episodes show! I hope it gets even better and becomes another one of my favorite shows from 2012.

The show is also packed with currently famous female voice actors so if you’re a seiyuufag you’ll like it.