Pretty much like with the Rainbow Live guidebook, there’s way more stuff that I expected. There’s an illustration gallery, with illustrations by Watanabe Akio and Matsuura Mai, all the DVD covers of Aurora Dream and Dear My Future, and some of the CD covers of Rainbow Live.

After that,  there’s a summary of each season, with an introduction of the characters and the key moments. The Rainbow Live Guidebook covers 3/4th of the show. So this Guidebook covers what the Rainbow Live Guidebook didn’t: the end of the show. Apparently there’s some clarifications on some events too, like the Juné flashback in episode 48. There’s also a part about Hijiri Jin and Rei’s rivalry, Lucky Star, the penguins etc. It seems just like summaries of the events but maybe there’s also new details, haven’t read everything yet. What I did read though are the small parts about what every character did at the end, and they don’t say anything new. It’s just a summary of the stuff you see in the ending. For example: there’s a part about how Wakana and Ann confess to Kazuki at the end, but it doesn’t say anything more than the show, it doesn’t say if he accepted one of them or not.

Of all the pics of Wataru they could have picked!!!
Then there’s Aurora Dream and Rainbow Live parts. These are also just global summaries of the shows. There’s also stuff on some of the side characters who played a big role, like Furea or Togashi Karina. 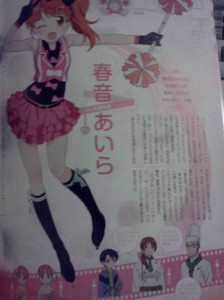 One thing nice is that the two shows’ section are separated, so for the characters returning in DMF, you have their AD profile and their DMF profile. 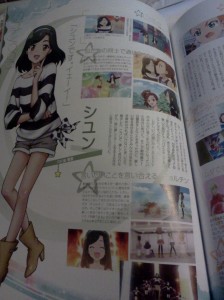 Each season also has a complete episode list, with a short summary of the episodes and the main staff who worked on it. It makes it much more easier to compare staff. Even for one of my favorite shows ever like Pretty Rhythm, I never felt like doing it because it’s too much of a hassle, but it’s really easy with this. For example, I could easily check that like they said at the After Party Event, all the last episodes of Dear My Future had scripts by Tsubota Fumi.

After that there’s one of the funniest sections, a complete listing of all the Prism Jumps in all three seasons. It’s super complete. It’s listed in categories: the Splash jumps, the Shower jumps, the Spiral jumps,  the Fresh jumps, duo jumps, trio jumps, and individual jumps. It even tells who did what and in each season, and the variants. There’s even the ones that were only done once, like the special halloween ones etc. There’s also a list of all the Prism Acts in DMF. There’s even the “fake” Prism Jumps that were in the specials DVD shorts of Aurora Dream. That’s really cool that they included a section like that. Pure fanservice.

I’m not a seiyuu fan but I’m really interested on what they say on each of the characters, it must be fun. Especially Itou Kanae, since she voices so many characters. I think it’s one of the few shows I know where one seiyuu voiced so many characters, I’m sure she must say at least one interesting thing about it.

Then there’s an interview of Hishida Masakazu, Iuchi Shuji and Tsubota Fumi. From the pics featured, it seems they talk about some of my favorite parts the shows, like Bell’s character development, Hiro’s obsession with Kouji, Mia and Hye In, Kyouko, etc etc so it should be super interesting. I hope there’s tons of new things that wasn’t already said in Twitter or the events. 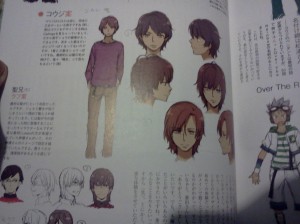 After that there’s an interview of Matsuura Mai. First two pages are about the girls, with pics of early animation purpose designs of NaruItoAnn she drew, so they’re different but a bit similar from the original chara designs drafts by Okama in the RL Guidebook. Okama did the original chara design while Matsuura Mai adapted them. Then the two next pages are about the boys. It has the early RL boys designs they already showed at the After Party event. That’s why I don’t think there’s a lot of new things in this part because it seems to go over some of the stuff they said about the RL boys chara design at the After Party event.

After that there’s a two pages interview of Mieno Hitomi, on how she wrote the lyrics of the songs in RL and her impressions on some of the songs/performances in RL .

Right after, there’s a two pages interview of Akao Deko, on her job at series composition for AD and DMF. (Yes, this is actually separated. Mieno Hitomi=Akao Deko, but she’s credited as two different persons. I guess she wants to separate her scriptwriter career from her songwriter/singer career)

After that there’s a 4 pages interview of Watanabe Akio, the original character designer of AD and DMF. Watanabe Akio is a pretty good chara designer. Bakemonogatari is a great example. Too bad all the seasons after the original look totally uninteresting.
Back in 2011 when Aurora Dream was about to start, when seeing it on Random Curiosity’s season preview, one of the things that made me write it down on my watchlist is that the girls look cute. I actually don’t really watch shows just because of cute girls, but I still decided to check it out. I don’t regret my decision.

There’s the early designs of Mion, Aira and Rizumu. Rizumu doesn’t change much between designs as he didn’t design her from scratch as she was already in the game. There’s also how Mion was first called Mai then Rion, then they changed it to Mion. Aira was called Mii at first. The AD early designs in the book were published already. I remember seeing them a long time ago. I think from the Akio Watanabe Animation Design Works book which was scanned and that you can find everywhere. 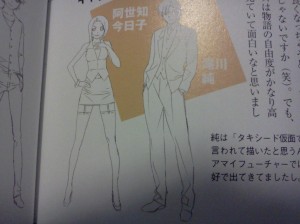 Kyouko used to have a more glamour look. Jun looks 100% awesome just like his final design.The Prizmmy girls all look much younger except for Ayami.

Jae Eun, Chae Kyoung, So Min, Shi Yoon, Hye In
Listing them in case you don’t recognize them as they look so different.

Meanwhile for the Korean girls, Hye In had twintails.  I like these early designs more than the final ones except for and Hye In and Shi Yoon. Chae Kyoung, Jae Eun and So Min look older and way better than in the show.

The last thing is a 6 pages interview of Hishida Masakazu, Yoshihiro Otobe, and Kyogoku Takahiko, calling them “the team behind the CG of Pretty Rhythm”. It’s definitely the funniest looking interview, as they talk about what kind of illegal weed did they smoke to get the idea for Mion’s ultimate jump Eternal Big Bang Beautiful World, or Hiro’s super gay jumps like Jounetsu Neppu Starlight Kiss. Jokes aside, they do talk about these two jumps in particular. Also about the evolution of the CG in Rainbow Live,  how they get the ideas for jumps and how they make them etc, so it’s by far the most interesting thing in the book in my opinion. If there’s one thing in the book I’m sure I’m gonna read translate and post about it here, it’s this interview.

Pretty Rhythm isn’t really popular so that’s the main reason I bought the book, I highly doubt anyone ever gonna scan it, or even make a small summary about the info in it. I won’t scan it either, way too much effort. It seems like a good opportunity to read stuff about seiyuu work, chara design, how people at series composition or directors work,  and tons of little details on how to make an anime in general so I’m pretty happy I bought this. It’ll also help me study Japanese.
Unless I die or something big happens, I’ll try to read it and post some summaries of the info&interviews in the next months. Yeah I’m not really in a hurry. And if someone already did it in the meanwhile I’ll just link it here. I’m also trying to do the same with the interviews in the Rainbow Live guidebook.
I also bought the movie BD. Speaking of which someone ripped it and it’s up on the net. That sure was unexpected. I got a Akaii Meganee postcard with it.

I think the only thing missing is a page dedicated to Beef Or Chicken.

2 thoughts on “Pretty Rhythm All Star Selection guidebook get”