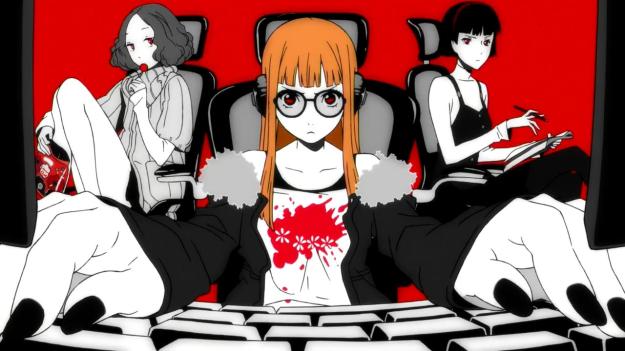 Translating info on the game from japanese blogs, twitter and 2ch. Things that got posted starting  August 6 since that was the third demo event.  There’s the schedule here.

I’m really looking forward to the game so I try to find any kind of info on it with the demo events happening. Usually I don’t translate things related to popular things as they’ll get translated at some point anyway. This Domina person on tumblr and PersonaCentral are doing a good job, but I really like Persona 5 so I can’t wait for others’ translations. And I’ll be paranoid and wanting to check things myself anyway. And there’s some things they don’t translate like things on the 2ch thread.

So then I just post what I find here instead of keeping it for myself. That way I’m also able to keep track of the things I translated. And honestly to get views too. I don’t want this blog to become too popular, but it would be nice to have more traffic as well. Baiting people with games anime etc, so they might also read the posts on more serious matters like denouncing racism is one of the reasons I started this blog.

I’m omitting things we already know from PVs or previous demo events that was already posted on news site like Persona Central.

My own comments are under parenthesis.

You can save anywhere when you’re at your place using the menu. There’s no calendar or specific save point to access.
You can display a bigger version of the top right map.
Each character’s gun has different uses.
In the skills menu screen, the illustration is MC sitting stretching his legs on a table.
(These four don’t have source because I read them during the first demo events last week and too lazy to find where I read it)

Source When defending in battle, Morgana rolls into a ball. The assist button makes you automatically switch Personas and target the enemy’s weakness.

Source When opening a chest, Morgana will climb MC’s shoulder to look what’s inside the chest. (Similar to how we saw An rest on MC’s shoulder when opening a chest in some Famitsu or Dengeki scan a while ago, other characters can do it too.)
When Morgana runs, it’s legs have a wheel like animation. (If you don’t get it think Road Runner)

(I honestly don’t care whether Morgana is a boy or a girl, I’m just using “it”)

Source Just like in previous games with Social Links, the higher the Coop rank the higher the bonuses you get when fusing personas of that arcana.
“If you rank up the Igor one it increases the number of persona you can carry”
(A pic of Igor back to back with MC has been reported to be on The Fool arcana coop menu, and everyone in the 2ch thread say “Igor’s Coop” too, so it really seems like it. The way they talk on the thread indicate it’s not plot tied and doesn’t rank up automatically too.)

Post 420: In a Palace, if the search gauge gets up to 100%, you get told that it’s too dangerous to continue and the game forces you to leave the Palace.  (The gauge at top left you see when activating Third Eye)

428: Doing Igor’s Coops unlocks all the base Persona functions. The skill for negotiating with Personas. Then the skill for Persona fusion.  Then one for getting more experience. One of Mishima’s coop skill is that characters not in the active party will still get experience too.

429: Sojiro can make you coffee. It’s an item that restores SP. (the post says “惣一郎”/Souichiro, it’s probably a typo and he meant 惣治郎/Sojiro)
Morgana’s skill allows you to make items in your room.
When you’re about to fail a negotiation, An will help you by giving you advice.
Like how some Coop characters give you new skills, ranking up the Coops with the other playable characters will get you skills too. There’s a skill that makes them defend you from a hit like in past games.
(Posts after these two talk about how coops are so essential to do, as it will get you base and convenient skills etc, so all the above like the An negotiation help are probably obtained after you raise their Coop.)

496:Talking about how the game branches a lot and there may be up to 6 endings(I really don’t believe this. A post later quotes it too saying this is obviously fake)

507: Ranking up Igor’s Coop allows you to carry more Personas and also gives you the Third Eye skill.

511+ Talks about how if Igor really is the Fool arcana, this means the kaitou dan doesn’t have a designed aracana Coop. There’s no plot tied Coop Arcana that ranks up automatically like the investigation team one in P4. (Then they speculate that maybe there will be one once you clear the casino. I agree too, as every character joined by then. You got the 2nd plot tied arcana in P4 after the 1st bad end point, and in P5 MC failing to get out of detention after the casino and getting executed will probably be the first bad end point. Also, I don’t think there’s actually a traitor, just someone who somehow knows the kaitou dan’s plans.)