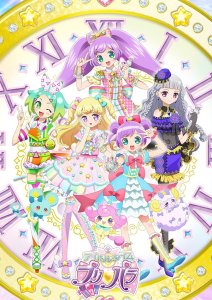 You can read about it on ANN

As expected they’re only keeping Laala and removing the other characters, it was obvious since when they announced the new season on December that it would turn out this way. Not gonna translate other things that aren’t in the the ANN article because I’m not interested in this for now. Not that I won’t watch it when it’s out or that I think it’ll be bad, it’s just I still haven’t watched s3 anyway so It’s not in my priorities to use time to learn more about Idol Time PriPara/AiPara or translate stuff about it. I’m not in a hurry or hyped about it.

The reason why I made this post is because I saw something interesting, PR director tweeted a report about the press conference when the series was announced. Takara Tommy executive(or whatever his position is)Toshihiro Morioka said they’re planning to keep the franchise going for at least ten years, as it’s been 7 years since the Pretty Rhythm arcade launched, and 6 years since the anime launched.  So in 2020 it’s scheduled to be the arcade game 10th anniversary, and in 2021 the anime 10th anniversary.

So in my opinion this means:

AiPP is at least 3 years long like Pretty Rhythm and PP. Laala will probably stay all the seasons too. If they didn’t remove her it’s possible they won’t remove her when they possibly reboot AiPP as well in 2020-2021, and will keep Laala as long as PP is going.

If they ever do a ADMF x RLKinpri crossover or a ADMF + RLKinpri + PP + AiPP crossover, it’ll be then. I think Kinpri will be done by 2020. PR director said the storyboard for Kinpri 2 is three times bigger than the one for Kinpri 1, so it should finish Hijiri and Jin’s story. At most we’ll get the Kinpri TV anime they always wanted to do in 2018, but I don’t think they’ll milk Kinpri once the story is done. 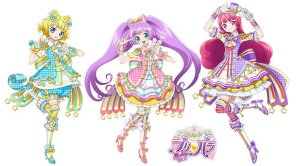 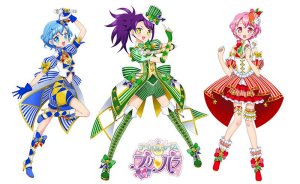 EDIT: On Jan 25th they revealed the Iris voiced characters are returning as well. Seems the PriParapocalypse din’t happen, I was wrong. I wonder if the others will return as well or will they be put on a boat.
Because they redesign the dresses every season, and the ones in S3 were particularly ugly with their yellow tones, I used to joke on how S4 would be a reset because they can’t make the dresses any uglier. Turns out I was wrong on even that. Oh God just what did they did to Shion.