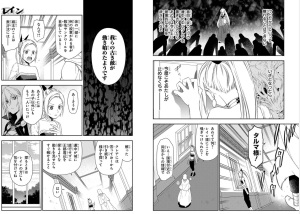 It’s been a while since we had two months like that when only half a chapter was published, maybe mangaka Sumikawa Megumi is busier than usual nowadays. I never said it but part of why Rain manga is so good is her illustrations. I really like how she sometimes gives it a oldschool shoujo vibe too. Or add roses and stuff around panels, which happened a lot in this chapter.Then you have the smugfaces, the angry faces, the cute faces. And then the fights are awesome too. She can draw anything well.

We learn more about Telma and how she has no attachment to her faction besides trying to help her sister. The people there always treated her with respect in public but hold disdain towards her as while she’s the sister of the “one who can hear the voice of gods” she’s just a normal (useless) person. The reason why they wanna kill Shelfa and mazokus is if mazokus’ existence become public “people with brands on their bodies will become active”. That’s what starting to happen now in Sunkwoll, as even if the masses don’t know yet that Shelfa has mazokus inside her, everyone knows about the mazoku Noel working with them. 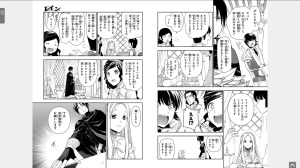 Meanwhile Yuuri and Selphie end up chatting with Shelfa, with her and Selphie realizing they both like Rain.  Shelfa is currently receiving tons of marriage propositions, including one from king Fernando. Yuuri is still the funniest character, mocking him for doing this while he doesn’t even have a country anymore. (He does mention it’ll be after he’ll get it back though)
Among the letters is some ominous one praising Shelfa as their lord and happy of their return, partly explaining the cryptic scene from before. I guess the people with “brands on their bodies” are people possessed by mazokus, and the ones inside Shelfa were some kind of leader in the past in their world. They’re probably from different countries/factions in the mazoku world than from Reygul though, else they’d go join him instead. We still need more info on this.

Later at night, mazoku Shelfa wakes up and notes how Shelfa’s body actually isn’t that bad and how humans have natural proficiency at handling Exceed. Shelfa only eats peanuts though, so she ends up asking Milan to get her some cake which spurns an interesting dialogue with him.  Milan got some guts and shows how every single character is Rain is well written.

Next chapter another large scale battle will start. We’ve had tons of duels recently:
Rain vs typical overpowered isekai webnovel misogynist MC aka Roy (I’m still amazed how Roy literally was an isekai MC. Amazed how the author actually did this. Apparently this fight was in volume 7 of the novel, which released  in 2013. However the chapter itself is probably from before that, as Rain’s author Yoshino Takumi publishes the chapters in newsletter like mails sent to fans before the volume releases. It’s pretty impressive he thought about making fun of that isekai trope in 2013 when the isekai webnovels fad had just started)
Shelfa Vs Crea -> Rain Vs Crea
Alisa Vs Clarence -> Rain Vs Clarence
Gunther Vs Alisa -> Rain Vs Alisa
All these duels ultimately had Rain, so I’m happy we’ll get to see more characters doing things again, though that also means they’ll be in danger of dying. 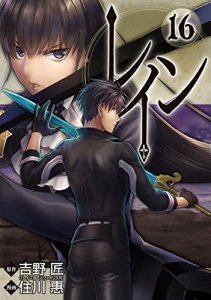 Rain manga volume 16 was released on May 10 2018. As always there’s a kindle version so be sure to get it. The cover with Rain(‘s back) and Alisa is pretty cool