Posting a random unrelated picture as always, I don’t want to waste time trying to take a screenshot or find something that would fit here. Though it’s actually not that unrelated as Mouretsu Pirates and Nobunaga The Fool share staff.
The post is short but I still put a read more as I’ll spoil things up to episode 14 included.

END_OF_DOCUMENT_TOKEN_TO_BE_REPLACED

I guess I could post a pic of JEANNE KAGUYA D’ARC but I really don’t feel like it. Her name will keep making me laugh for weeks. Really looking forward to the show each week just to hear it. It’s been a while I got to see a ridiculous French name. Since Dog Days’ LEONMITCHELLI GALETTE DES ROIS I guess.  Though that one is sooo ridiculous it just makes me sad instead of laugh, nice thing I never watched this show. Anyway  you can see that Nobunaga The Fool really is a show for Japanese people, like Thomas Romain said. It’s like Japanese’s ideas about the world outside Japan cranked up to eleven.

There’s a scene where JEANNE KAGUYA D’ARC speaks french at the end of episode 2. She says “Elle est mignone”. For once it actually sounded okay, and the sentence is correct so I’m just nitpicking: There’s  some sentences that would have fit better, like “Comme elle est belle/jolie”. “Elle est mignone” feels like they just put “あの子かわいい” in Google Translate and copypasted it. This is weird too since Thomas Romain is working on the show, so they could have just asked him. Though as the sentence is perfectly fine, maybe they did ask him.

Another possibility is that since it’s Japan, they could have went: “NOPE, he’s an animator, and his job is to draw, not to check the gratuitous French we put in”. I don’t really see this happening as Kawamori Shouji is at series composition he’s a cool guy. It’ s not like I’m there though. It’s not like I can know. (Well I could actually ask Thomas Romain directly about it on Twitter, but I don’t have twitter)
I know I’m making really weird assumptions. But this is my whole point in this paragraph actually. Too many people say things about anime studios without really knowing anything.
Well it’s true that Kawamori san is a super cool guy though. 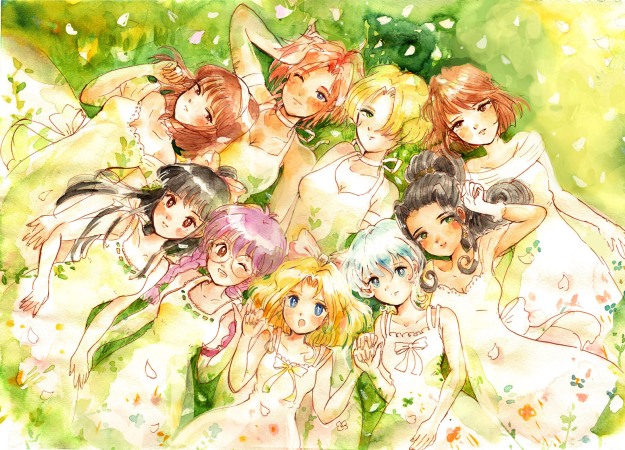 About the show itself now. Well it really does feel like Escaflowne but worse and with today’s standards. Like how the mechas are in CG or how we’re getting a love triangle with two girls instead of two guys. I actually really dislike comparisons like these, like how people said Valvrave was the new Code Geass, because it really wasn’t. I did like Valvrave though and thought it was a very good show. I love Code Geass as well.

Maybe Nobunaga The Fool will turn out completely different than Escaflowne. I hope it does. Speaking of which I thought about some guesses about the plot.